Research has revealed that British Director Percy Stow filmed a Pied Piper movie in 1907 and a Robin Hood film in 1908! If he did a Wilhelm Tell, that would be amazing.
The Piper Film is not available online, but hopefully soon screenable in the Hameln Museum. 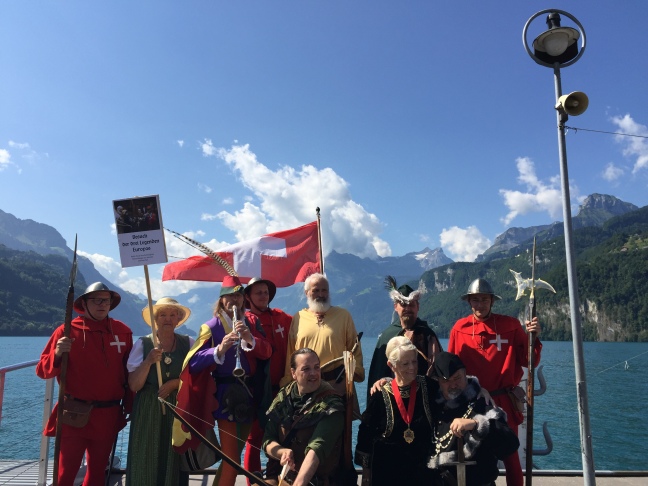 The Pied Piper of Hamelin, Robin Hood (Nottingham/England) and Wilhelm Tell from Switzerland created the Alliance “Legion of Legends” and meet on special occasions. From the 21st to 23rd of July 2017, the legends met in Switzerland by Lucerne at the Lucerne Lake and thus closed the circle. There, where the Swiss Confederation was sworn. But more important were the renewed communion and intercultural exchange. “Legion of Legends” will continue to grow, according to plans. Scotland’s Braveheart, France’s Joan of Arc and Spain’s Don Quixote are also candidates. The idea: to organize regular meetings and, symbolically, to demonstrate a picture of the history of the important legends of the European continent.

The first day of the long weekend with tell and his friends was a good day: a warm welcome to the town Hall of Schwyz, an interesting tour through the Federal Archives, an eventful visit of the Schuler St. Jakobs-Winery in Schwyz with its cooperage and the impressive wine cellar full of wooden barrels. On the second day it was a ride with a steam-boat to Rütli, where the legends swore “their” Rütli oath and then continued the tour with many Fan encounters on the Lucerne Lake incl. Uri to Lucerne, where the Kanton Council president was waiting for them. In Lucene the “bear danced,” photo shootings were spontaneously called at every corner. Gesslers end, the Hollow Way was the final goal. Sunday, the last day, it was off to the Goldau Zoo, followed by the Rigi Cog Railway on a surprising ride to the mountaintop. On the return they visited in Gersau the unique crossbow workshop of “Tell”.

More about the legend weekend:

Arrival on Thursday wetting the dry throats during a briefing at the Brunner Hof-Bar then on to quarters at City-Hotel.

1st day start: The Swiss Guard has found itself in its traditional garb, from head to toe red with a white cross on the chest, with halberd, sword and a metal helmet. As a surprise from the hired Taxi Company, the “Legion of Legends” rode a white stretch limousine with the guard

to the Schwyz wine shop Schuler, operated in the 11th Generation and 325 years old. A champagne reception with a snack and a kl. Tasting of wines was prepared and festive. In the connected Cooperage was demonstrated to the guests how a wooden barrel is formed. The legends immortalized themselves on the freshly branded cask

and during the guided tour of the wine cellar there was a spontaneous, moody photoshooting in front of giant wooden barrels. 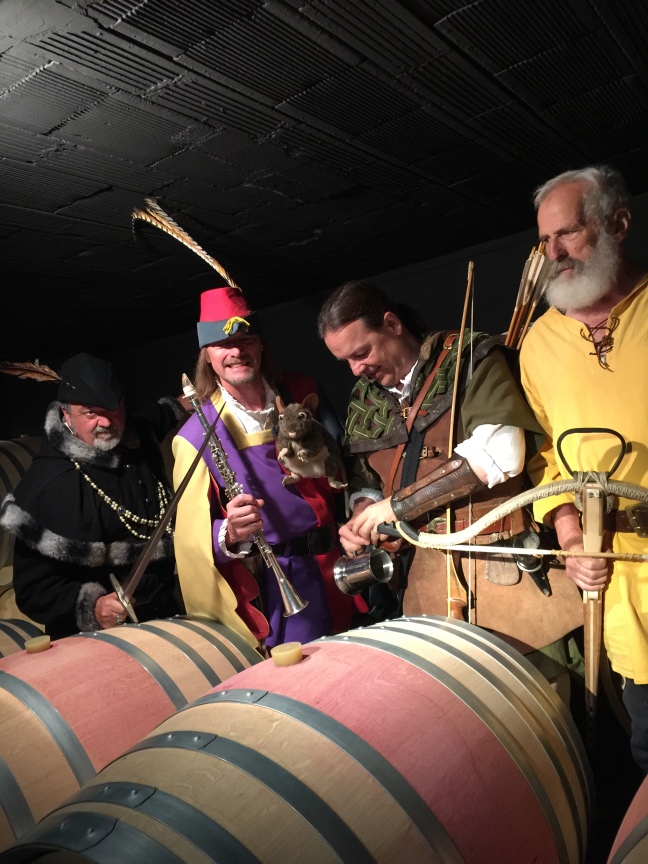 The tell workshop is moving to the site of the wine shop, so that the survival of the medieval workshop is secure. Just like a good wine, Tell-Workshop-Director Sepp Steiner himself has aged well and rejoices over the continuance with the wine-shop Schuler.

In front of the Federal Letter Museum, the central document Archive of Switzerland, in which the federation certificate of 1291 is kept with the original oath, the legends were received “befittingly” on the gallery with two alphorns.

In the city hall of Schwyz the Legionnaires were received by tourists, politicians and press representatives, including the municipal president, Xaver Schuler.

In the boardroom, The Pied Piper, Robin Hood, Nottingham’s Sheriff, Wilhelm Tell and Gessler, played their story to the exclusive audience.

In addition, Nottingham’s councilwoman Jackie Morris broke a lance for the cultural association and the sustainable expansion and consolidation of the Legion of Legions.

Afterwards, the excursion to Schwanau, a local venue in a castle complex and lookout tower with a view of the Rigi on a small island in the Lauerzer Lake, which can only be reached with a transfer boat. There, magnificent panoramic images were created in front of and behind the camera and the asparagus soup was delightfully served in a liquor glass and other refined dishes were praised by all as very tasty. 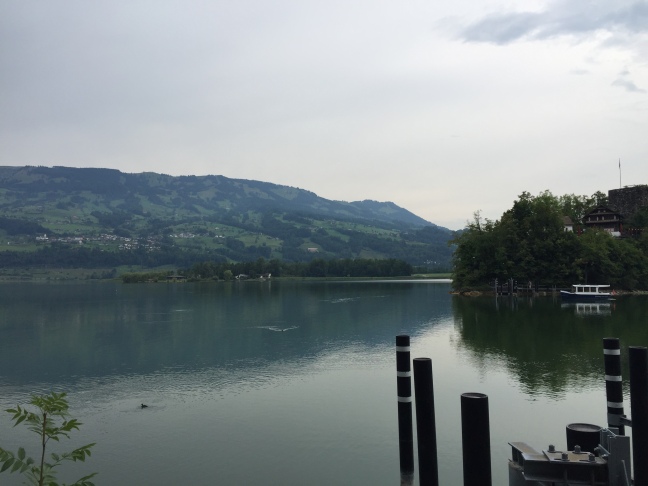 On the second day, the legends travelled with a 100 year old paddle-wheel steamer over the Lucerne Lake on a course to the Rütli and went uphill to the place where the oath was supposed to have taken place in the cloak of darkness 710 years ago. The guard called to formation and then “attention” followed the great moment: There the legends each gave a vow to their Union of the “Legion of Legends”in their national language .

A little above the “Schworplatz” lies the Rütli Meadow. The meadow belongs to all children of Switzerland (no State property). There is also a guesthouse where a panoramic view of the “Mythen” can be seen. “Hornkühe” on the hillside and secluded places among many trees contribute to the perfect idyll. Almost all Swiss children go to the meadow in their schooling, just like almost all Lower Saxony children visit the Pied Piper in Hamelin. On the next leg, it was past the Tell plate. There, he is to have lept from the boat to the shore and thus escaped the Reeve Gessler and regained his freedom. On a chapel there on the shore, the event is depicted on frecsos.

In Lucerne, the delegation at the boat jetty was already expected by the Canton Council President, Vroni Thalmann-Bieri, and escorted her through the port city, which is bordered by the shore of many small shops and gastronomic venues. A winding river bridge and promenade with a pretty baroque old town directly on the Reuss and Lucerne Lake, explain why many Asian guests find their way into this town. 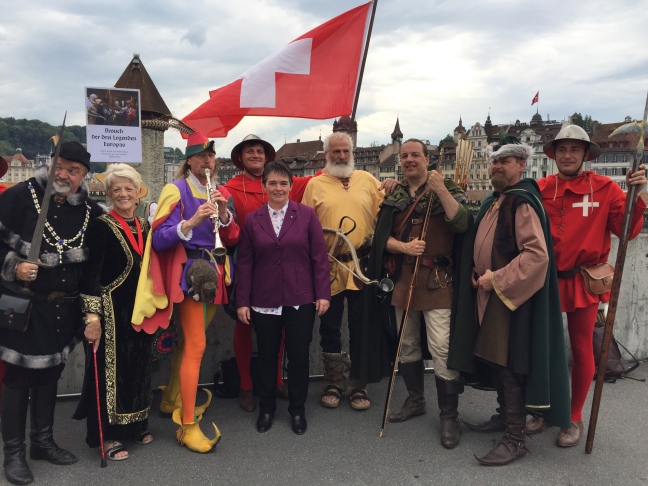 The evening ended with the visit of the Council cellar with an attached brewery – where even the visit to the toilet becomes a pleasant experience – the way leads through a magnificent courtyard. The houses were built around 1500. The Legends survived the crowd diving and the relentless photo attacks were parlayed with dignity. 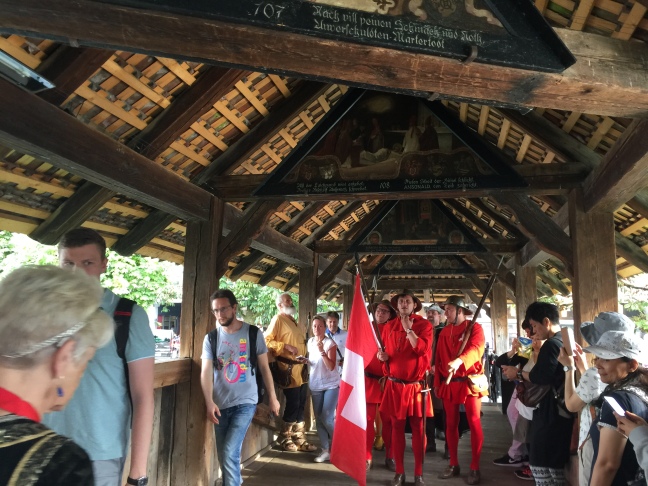 On the return, halt was made at the “Hollow Alley” where Tell of the saga killed Gessler. Like the Rüti Meadow, this place has also been awarded to the children of Switzerland. The alley was returned to its original state, a modern layer had to be removed. To finance the action, children had to bring 20 Rappen to school. Result: a barbecue area and a play area as well as a roofed information room were created.

On the third day, the Legends travelled to Goldau Botanical Zoo, which was created on a landslide site. 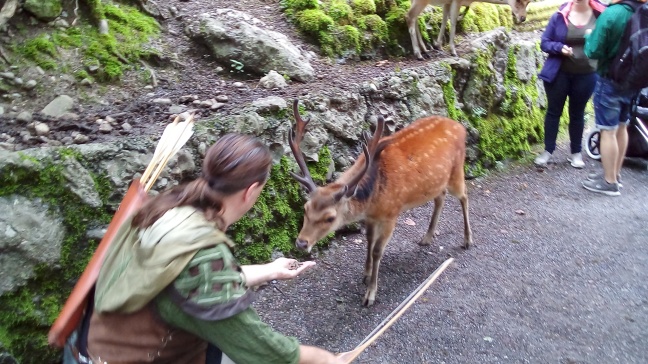 The site has been largely preserved and only animals indigenous in the region are preserved in the zoological garden.
The mountain avalanched 1806 and had buried an entire village with over 400 people.

Finally on foot, the path continued to the Rigi Valley station, where train attendant Hanspeter Gloor disguised as a historian of the traditional Rigi railway already waited.

A richly decorated Book of the year 1600 under his arm (we keep ours chilled behind glass in museums) with wood carving, rivets and gold edges, he greeted the comers heartily. The cog railway was put into operation for the first time 1871. With an incline of 19.4 percent or 1940 promille, the train runs up to 1800 meters. In the direction of Vitznau, it is 25 percent incline. The Rigi-Bahners wanted to celebrate the trip with the Legion of Legends, and they succeeded: at the stop on the mountain station they hung a classic old saloon car on and a “Baroness,” Carmen Brecht, hosted the guests. Pouring drinks at an angle is somewhat adventurous and not to be taken lightly, but nothing spilled from the special skewed glasses on board. 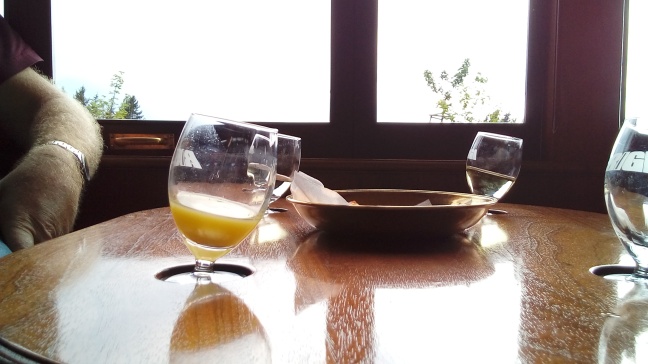 The only drop of melancholy: The Rigi was fogged in that day.

Later Tell, alias Sepp Steiner, opened his Tell’schen Crossbow Workshop: In addition to the ancient construction of crossbows, which he produces in an old-fashioned method, he demonstrated informatively and entertaining a medieval hand-lathe, a hand-drill and a rope-machine that were able to be tried out.

At the end, Tell had gifts for the guests: He passed out wooden cutting boards with a carved Rigi Mountain panorama and Swiss knives, as well as local salami and hand-woven towels with a Wilhelm Tell motif from a Gersau partner.

Vendelin Coray, tourism chief of the canton of Schwyz, praised Christian Detterbeck for the successful preparation of the Legends Weekend program and will use it as a basis for a Tell tour for the tourists. “This emotional experience of Switzerland can really only be experienced perfectly in central Switzerland”, concluded Tell’s assistant Hedwig Zangger.

The Legion of Legions separated at the Gersau Country Inn “Tübli” in peace and friendship. Reeve Gessler was so moved and reformed that he gladly paid the host with a full sack of “Free Gersau Gulden”.

Previously: Rat-catcher actor Michael Boyer and Wilhelm Tell alias Sepp Steiner visited Nottingham/England for the first time 2015 to celebrate the “Robin Hood Day” with Robin Hood, portrayed by Tim Pollard.  The next union was at “Hameln Pfeifer Day” (exodus of the Children of Hameln 26. June 1284) in the context of Grimm Jubilee celebrations (#sagenhaft – 200 years of German legends of the Brothers Grimm) in Hamelin 2016. The legend of Wilhelm Tell is also recorded by the Grimms in the 2nd volume, that appeared in 1818, so that the Swiss have another occasion to celebrate with their national hero in 2018.

In the Tell Legend, he had to shoot the fruit from the head of his son in the pure chicanery of Reeve Gessler in the year 1307 (according to Tschudi «Chronicon Helveticum»).

Wilhelm Tell starring Sepp Steiner is a passionate tinkerer and has constructed an apparatus in a wooden box that, at the right moment, bolts an arrow through an apple from within. He uses a 450-year-old crossbow with a hand-carved wooden arrow of lichen-like winds for the “Apple shot”. The tall Swiss with Beard works voluntarily in the medieval workshop in Gersau near Lucerne on the Lucerne Lake. There he offers guided tours on the topic of Wilhelm Tell.

Photos from the meeting of the Legends in Switzerland for publication as download, stating the “photographer Dag Hakon Hellevik” free of charge at: Https://pilzie.smugmug.com/Tell-and-friends

More pictures and impressions of the “Legion of Legends” at: www.legionoflegends.eu

(Press Release from Hameln with pictures) 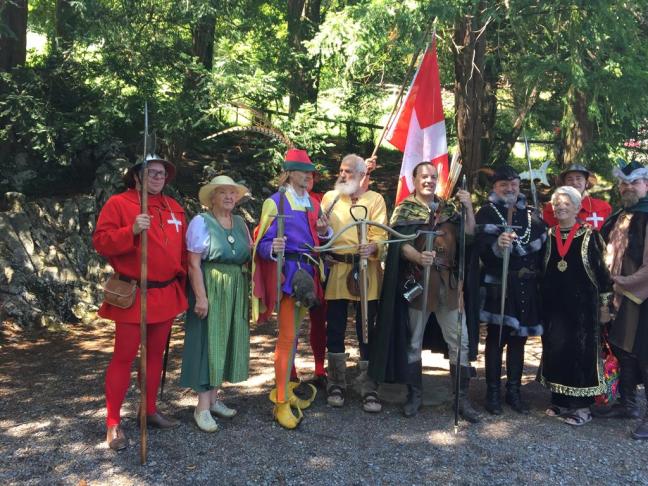 We have put our own pictures of the Swiss trip online at:

The pictures of the Swiss weekend are online at:

Getting good press in Switzerland

We’re in the Swiss newspaper, and more.

And just moments away from being there in person. 😉